In the second installment of my “top five” series, I present my five favorite parks in Joburg.

An editor once asked me to review a description of Joburg for an expat website. The description said something like, “It’s difficult to spend time outdoors in Johannesburg because there are no safe parks in the city.” I nearly laughed aloud when I read this, as it’s such complete nonsense. There are so many lovely parks in Joburg that I struggled to narrow my choices to five. All of the parks listed here are safe in my opinion, as long as you don’t go alone or at night.

A swimming dog at the Sandton Field and Study Centre.

I don’t think the trees are indigenous but I love them anyway.

The most beautiful rose at the Johannesburg Botanical Garden.

The Johannesburg Botanical Garden/Emmarentia Dam is two parks in one: the manicured botanical gardens on one side, where dogs are not allowed, and the larger, wilder Emmarentia Dam on the other side, where dog-walking, mountain-biking, etc. are permitted. The dam also has a boat house for canoeing and rowing.

The Rose Garden is my favorite place to hang out (especially on Sundays, when the garden is filled with wedding parties) but I also like walking around the dam and watching the dogs. This is my go-to park for picnics and a good place for running, too.

A family at James and Ethel Gray Park. 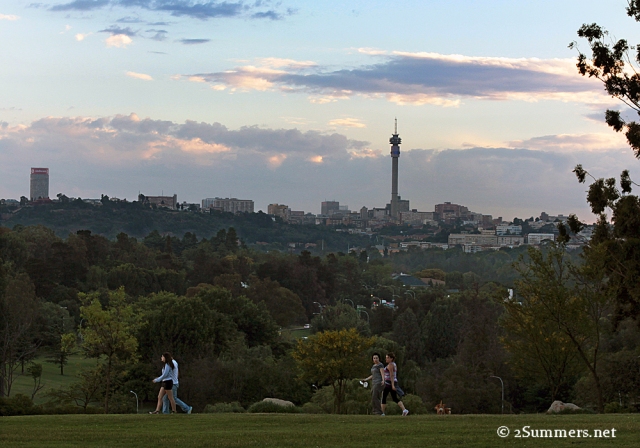 This park has a fantastic view of the Joburg skyline.

I also found James and Ethel Gray Park while researching for SandtonPlaces (see my previous post about James and Ethel Gray). I love the layout of the park and also the location — Birdhaven is such a tranquil suburb and there is a nice shopping centre nearby with good restaurants. James and Ethel Gray has a great community vibe and is one of the best places in the northern suburbs to watch the sunset over the Joburg skyline.

The iconic waterfall at Walter Sisulu.

Sunset over the wildflowers in Walter Sisulu’s indigenous plant section.

Not to be confused with the Johannesburg Botanical Garden, which is a Joburg city park, Walter Sisulu is Joburg’s only national botanical garden. (There are nine national botanical gardens nationwide, run by the South African National Biodiversity Institute.) Getting to Walter Sisulu requires a bit of a drive out into the West Rand but it’s worth the journey. The grounds are massive with miles of hiking trails, the indigenous garden is a plant-lover’s dream, and the huge waterfall is stunning. Walter Sisulu also has a bird-watching hide and a musical performance area where big-name artists play concerts.

Sunset from Melville Koppies East. I took this photo a week after I moved here, on my old point-and-shoot. 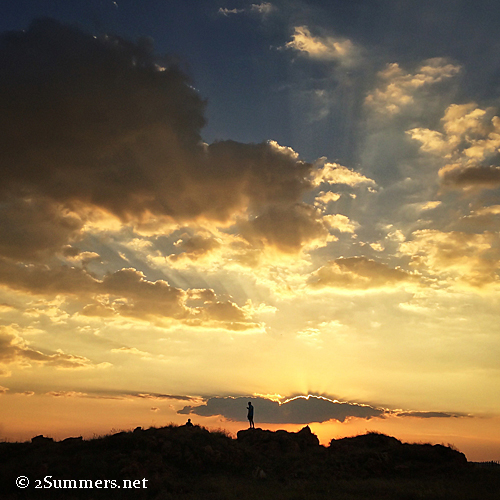 Another sunset from the Koppies.

What I love most about the Koppies, beside the fact that they’re in my back yard, is how wild they are while also being so accessible. I could go on and on but the best place to learn about the Koppies is the Friends of the Melville Koppies website. The site also has a schedule for guided Koppies group walks, which I highly recommend. (Melville Koppies Central, which contains significant Iron Age ruins, is closed to the public except for guided group walks.)

A moody Instagram shot from the top of Melville Koppies East.

Summer has arrived and Joburg has one of the best climates on earth. So print this list and get out there. More top five posts are on the way.

The ornate and beautiful staircase at the Freemaso

Meet @farooqasafar, aka The Strongest Man in Malaw

Ever wondered what’s inside the huge Greek Ortho

Brixton, Baby! Some highlights from the Blogitects

The making of a Jozi-style black-tie suit, by Pape

Thorsten and I went to @shepstone_gardens yesterda